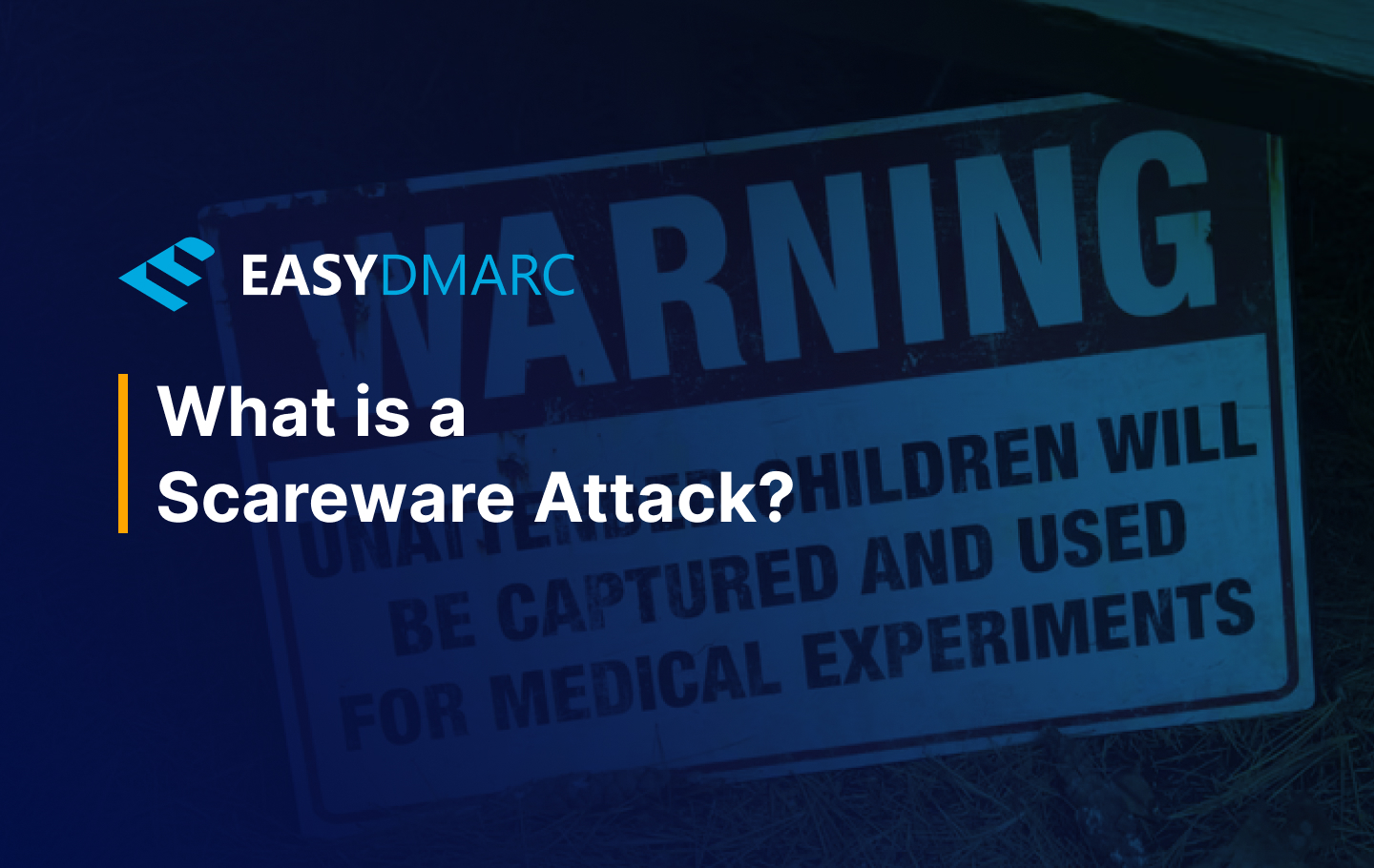 What is a Scareware Attack?

Cyberthreats have become more rampant in the business world, and individuals and companies alike need to be on the lookout. Most people are familiar with common social engineering attacks like phishing. However, scareware, pretexting, and baiting are also common.

What is scareware, and how do cyber actors use it against people online? This article introduces you to the attack techniques, presents examples of scareware, and offers prevention mechanisms.

What is a Scareware Attack?

Have you ever received a pop-up notification warning that your computer has been infected with viruses? It’s a classic scareware technique. As its name suggests, a scareware attack scares users into thinking their computer has a virus. It baits them into a trap of downloading additional programs to remove the fake malware.

The aim is to lure users into revealing sensitive information to what they think is a legit solution to their cybersecurity issue. Scareware attacks can cause several damages, including identity theft and credit card fraud. However, if you’re alert enough and know how to prevent scareware, you have nothing to worry about.

Learning to notice the threat starts with understanding the techniques used to execute these attacks. Identifying scareware attacks can help individuals and organizations avoid them and take proper measures to mitigate the risks.

Hackers use various entry points to launch such attacks. Below are some popular tactics.

This is one of the most common scareware attack techniques used by hackers. You’ll mostly encounter this method on websites powered by popular social media platforms like Facebook.

With this technique, a pop-up poses as an antivirus software alert. It attempts to scare users into believing that their computer or mobile devices carry dangerous malware.

The hacker’s objective is to get the user to click on the ad or pop-up to download what they think will solve the security issue. The user clicks the pop-up and places the system at risk with malware instead of antivirus software.

In most cases, these pop-ups are stubborn and difficult to shut down. If you experience such an issue, press Ctrl + Alt + Delete to restart your system.

This is a technique where a hacker sends an email (or voice message, SMS, or another type of communication) asking you to perform an urgent action. In most cases, attackers use spoof email addresses to appear legitimate.

Malvertising is known as malicious advertising. With this scareware technique, hackers use third-party ad distributors to show ads that don’t appear hostile but are, in fact, ill-natured. Malvertising allows cybercriminals to spread malware, posing as legitimate ads on popular websites.

In some cases, hackers offer users free goodies such as PDFs of popular books, songs, software, videos, music, and games. Most users are unaware that hackers hide malware inside these offers.

Why is Scareware Efficient?

Scareware is one of the most prevalent cyber threats in the world. Why is it successful, you might wonder? Scareware attacks are incredibly efficient because they create a sense of urgency and fear in victims, scaring them to take action right away. Think about it. Suppose you think your system carries viruses. In that case, you’d want to take urgent action to rectify the problem before it escalates.

Scareware is a common and effective way for cybercriminals to access your system and steal your sensitive information. Like other social engineering attacks, scareware has been around for quite some time. It’s grown increasingly popular due to its urgent and pushy nature. Millions of individuals and organizations have been a victim of such attacks.

Another “Windows support” pop-up alert also asked users to purchase antivirus software for $49.95. Peteris Sahurovs was arrested in 2018 for orchestrating the scareware scam. At this time, the attacker had already made more than $250,000.

The program tricked users into buying repair services, which they don’t need.

How to Spot Scareware

You can’t stop what you don’t recognize. If you want to know how to prevent scareware, learn to identify it. In most cases, scareware attacks show a message alert with a red screen displaying a security logo and dialogue box.

The dialogue box can look like it’s coming from your current antivirus software or Windows/iOS operating system. Occasionally, scareware attacks come with a “Clickjacking” feature. When you click the “X” or “Close” button, it redirects you to a malicious website or automatically downloads malware programs on your devices.

If you spot these attacks quickly enough, you can close the dialogue box without activating or downloading any malware.

Anybody can become a victim of scareware, including business professionals of large organizations. It’s best to be on the lookout for these attacks and equip yourself and your staff with the necessary knowledge to avoid them. Below are six tips to dodge scareware attacks.

Remember that scareware attacks feed on fear, so don’t react or take action immediately. When you see a pop-up notification or ad on your screen, take your time to assess the issue. More often than not, you’ll likely realize whether something is fishy.

Give yourself enough time to reason. It’ll help you see past the attacker’s illusion. Be on the lookout for red flags like misspellings or unusual word choices.

If the mail or ad comes from a popular vendor (like a bank or antivirus software provider), check for odd or incorrect brand graphics. Sometimes, the minor details are a dead giveaway. If you feel something is off, then it usually is.

Email masking is common in the cyber world. Masking your email address hides your actual address in your advert. Instead of spelling out the email address, you might use an “Email me” link or a button.

Most email providers format a sender’s address, so it’s easy to recognize. Unfortunately, hackers leverage this.

When you receive an email, check to confirm who it’s from. If the sender’s name sounds familiar but the email address doesn’t, this is a red flag that the mail is from a malicious actor.

Like email addresses, links are deceitful. If you’re not familiar with a domain URL or you can’t deduce that it’ll lead you to a phishing website, it’s best not to click it at all. Always hover on the link or right-click to view where the site redirects before taking action.

Never download any attachments from unknown sources. Even if you know the sender, double-check to confirm the message isn’t from a spoofed email address. Some hackers send virus-infected attachments in the form of Microsoft Excel or Word files. Be vigilant!

Use Email Security Protocols to Safeguard Your Clients

We already mentioned that phishing is a popular scareware technique, especially for businesses. As a CEO, company owner, or IT team leader, you’re in charge of your company’s email infrastructure.

We recommend starting with an SPF set up to protect your domain from being spoofed. The second step would be configuring your DKIM records for message authentication. This ensures emails and attachments sent to your clients aren’t altered to contain malware.

Scareware ads or pop-up alerts on your screen mean that malware might’ve infected your computer. It can also be a result of the site you’re visiting. Here are common signs that your system is infected:

If you mistakenly download a fake antivirus, uninstall it immediately. You can invest in third-party cybersecurity or antivirus software solutions to remove the scareware entirely.

Carry out in-depth research and discuss scareware risks with coworkers in the same network to discover how they solved the issue. Most importantly, ensure you update your computer and security software with the latest protective measures and patches.

Scareware attacks are serious cyber issues affecting individuals and organizations. They fall under the social engineering category, using psychological tricks like evoking urgency to push their target into a trap.

Individuals and employees should be vigilant. Don’t panic or make urgent decisions when you see a “scary” notification on your screen. Also, avoid clicking links or pop-ups from unknown sources.

We have a host of other social engineering-related articles. Check them out and share them with colleagues and family to help improve cyber awareness.