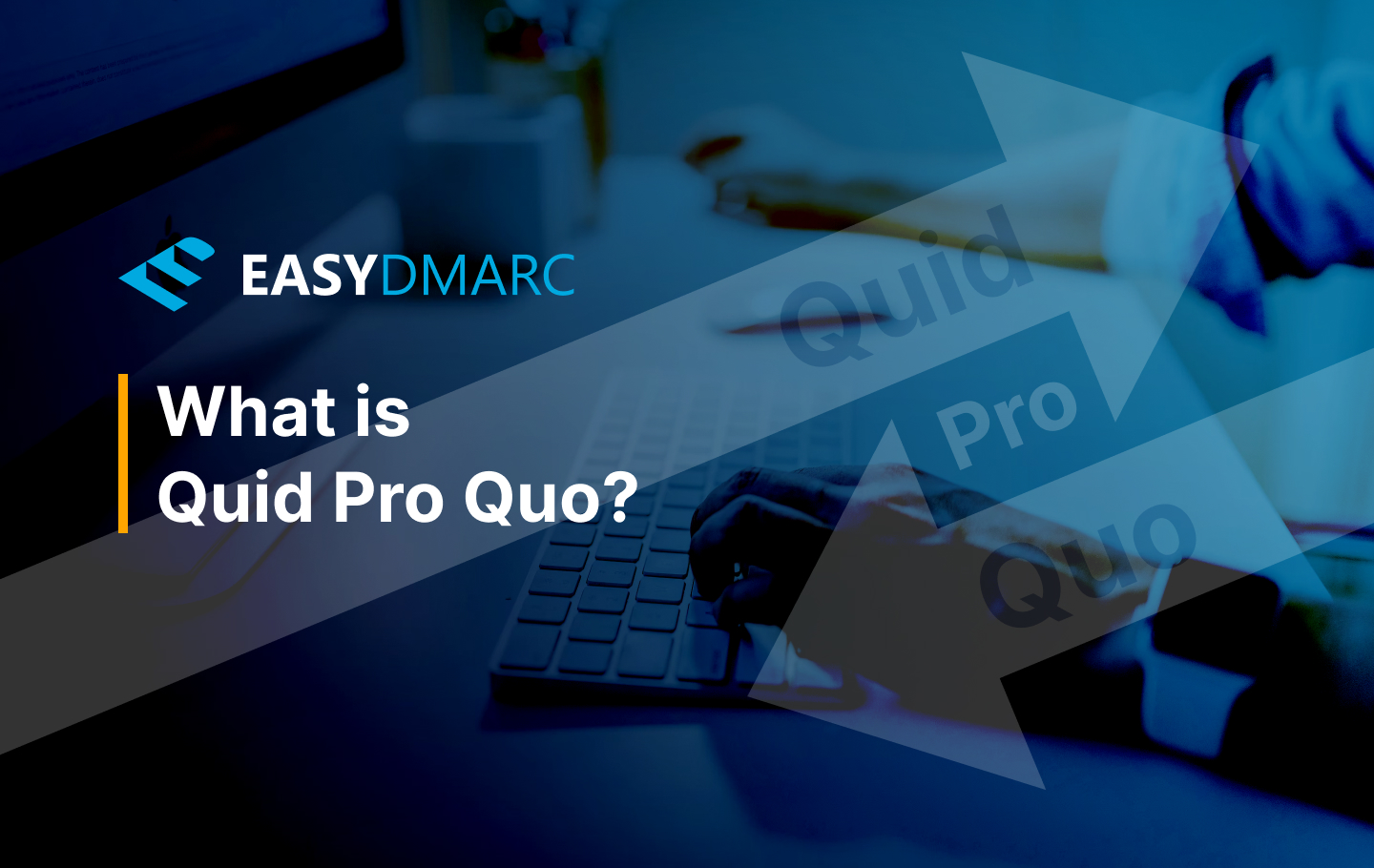 What is a Quid Pro Quo Attack?

There are a plethora of different cyberattack methods used to prey on companies’ information. Some require months of research, while others can be done in a single day. Certain attack types are more successful than others, too. These methods range from spoof emails to baiting employees into unwise decisions. This article delves into the social engineering method known as the “Quid Pro Quo” social engineering attack.

What is a quid pro quo attack? Read on to find out and learn what it can do and how to prevent it. We’ll also go over some quid pro quo examples.

Technically speaking, a quid pro quo attack is a type of baiting method. However, instead of trying to get someone to fall for something out of their own curiosity or fear, cyber actors offer them something in return. The Latin phrase means “a favor for a favor,” and that’s essentially what it boils down to. Attackers offer you something in return for information.

What Can Happen After a Quid Pro Quo Attack?

The worst part about a quid pro quo social engineering attack? Most times, it’s not the final component of an attack; It’s often a gateway attackers use to open the company or target up to other predatory measures. Here are just a few examples of consequences deriving from a quid pro quo attack.

A quid pro quo attack doesn’t always feel like you’re giving something away. For instance, your email address, which may seem inconsequential to you at the moment, might be all they’re looking for from the beginning. As soon as it’s in their grasp, prepare for an onslaught of malicious emails, scams, and spam messages.

The threat doesn’t necessarily come from what you traded away. Sometimes, what you receive in return can be the real poison. In some quid pro quo attack situations, attackers convince the victim they’re making a reasonable trade or transaction for a genuine product or service.

However, if they’re given a link to visit or a file to download, it’s already too late. Attackers can hand you faulty scripts and malicious files that siphon your information, infect your hardware, and even contaminate the entire company’s systems.

If your end of the deal had anything to do with company email accounts, you can bet they’re being used for malicious purposes. Depending on what emails the attacker gains access to, they can spam emails to all available email addresses of the company.

Or even worse, if they were able to get a glimpse of a higher-up’s email, they may attempt an impersonation attack and target other employees under its guise. This practice is extremely common as attackers can manipulate employees’ trust in company authorities.

Baiting generally relies on the fear or curiosity of its victims. It’s a trap that has little to no interaction on the attacker’s end once it’s set. All they do is wait for someone to trigger it. That’s its primary difference from a quid pro quo attack.

A quid pro quo email attack, on the other hand, requires a lot of direct interaction from the attacker. Such an attack offers the victim something in return, attempting to frame it as an even trade, or even one that’s more beneficial to the victim.

Think you’d be able to easily identify and avoid a quid pro quo attack? It’s not always that simple. Rather than exploiting a target’s greed, sometimes attackers don’t offer something of extrinsic value. Rather, they hold victims hostage with information.

If an attacker has information on the target or the target’s company, they may threaten to release it publicly or to the wrong person. An example of quid pro quo harassment is when attackers make demands using threats like:

“I have precious company information. Give me your user account information or I’ll make it publicly available.”

Even if this claim is false, the individual wouldn’t know it, so the hackers usually try to sound confident and avoid giving out more details than needed.

While the one above is one of the more extreme quid pro quo examples, it’s also a very real and possible scenario. Many companies lose even more information when trying to appease these predatory attackers.

Quid pro quo attacks can get messy fast. But they’re not unavoidable. There are certain precautions and prevention methods that reduce the chances of a quid pro quo attack from ever finding you. Keep the following guidelines in mind to steer clear of these sorts of attacks in the future.

Have You Initiated the Information Exchange?

One of the most important rules of thumb is never to exchange information unless you initiate the interaction. Whether over a call or via a message, don’t give up personal or sensitive information of any kind if you didn’t contact the support yourself.

It’s always safer to assume that customer support or similar services won’t seek you out. If you reach out to official support representatives, that’s one thing. If they find you on their own accord and start demanding information, there’s a problem.

Trusted phone numbers are readily available on official company websites. Never use unofficial or untrusted numbers of any kind. If you do, you’ll immediately put your number at risk of malicious callers and messengers looking to scam or exploit you. Be extremely cautious about where your number goes and who gets hold of it. The more eyes on your number, the higher the risk of a quid pro quo attack.

Good password management is one of the most underestimated ways to protect yourself against cyberattacks. Keep your passwords clean and hard to guess, and never reuse them. Of course, make sure you can remember them all.

One of the biggest ways attackers hold leverage over their victims in a quid pro quo attack is by holding information hostage—information they attain by hacking accounts with weak passwords.

Quid pro quo emails are similar to other email attack and cyberattack methods. However, something tempting on offer can hook in far more victims than a simple sense of urgency. In many scenarios, the temptation is a stronger driver compared to knee-jerk fear and often more reliable, too.

Remember to be careful when dealing with attractive offers on the internet. Do your research and take precautions, but if something sounds too good to be true, it probably is.