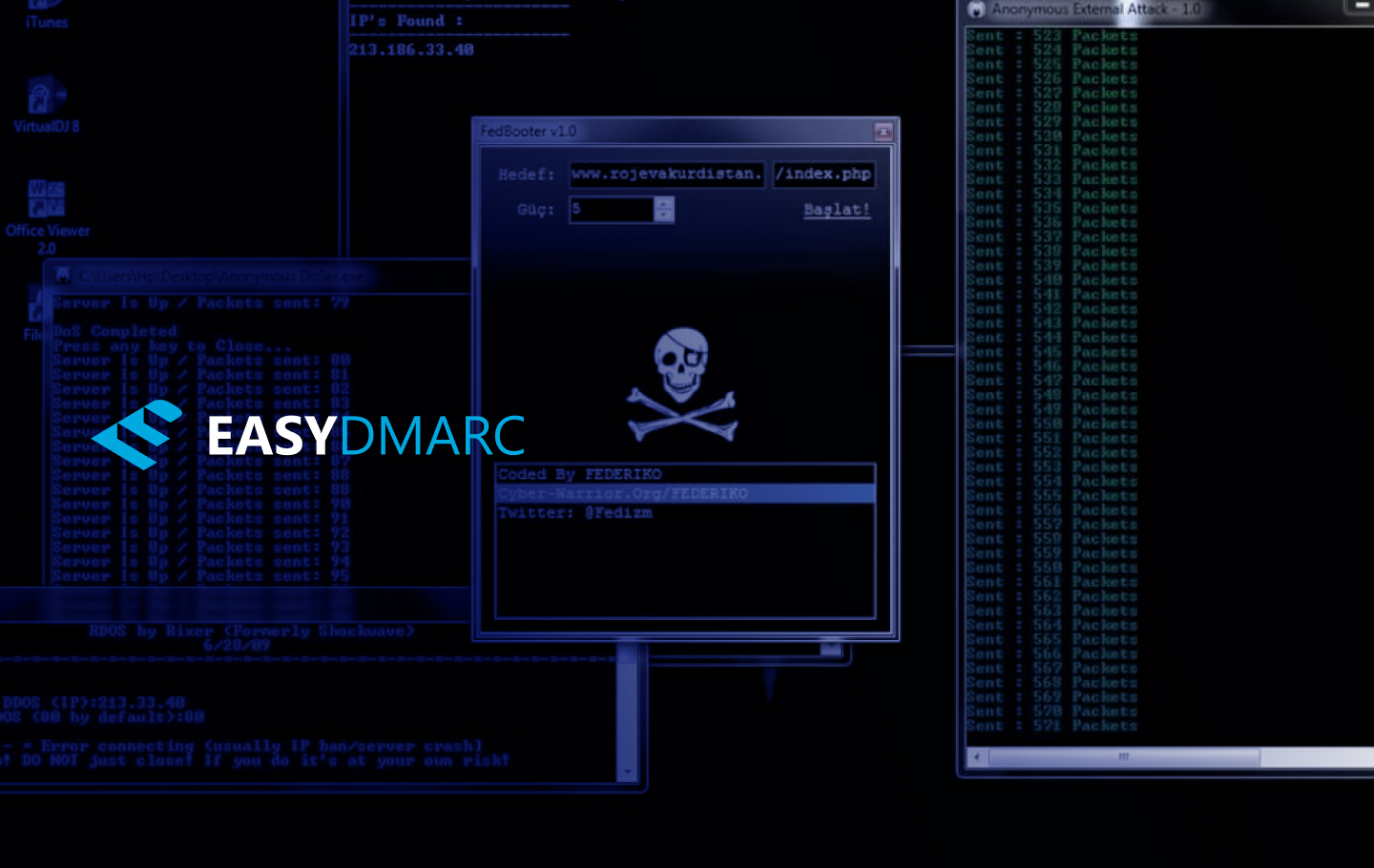 Tools Used During a DDoS Attack

DDoS or distributed denial-of-service attacks can significantly impact your sales, SEO ranking, brand image, customer relations, and all other business elements reliant on your website.

Hackers use different tools for DDoS attacks to flood networks with multiple requests resulting in their temporary or permanent unavailability to users. The usual purpose of attempting different DDoS attack types is to crash a website for financial, political, professional, or sociological gains.

Before moving forward on the main topic of learning about DDoS attack tools, let’s answer one vital question: How does a DDoS attack work?

DDoS attacks are conducted by first compromising internet-driven devices such as computers, wifi routers, tablets, etc. Once infected, these devices form a bot network or botnet and are typically referred to as bots.

Botnets are used in DDoS attacks to overwhelm servers, websites, and online applications with internet traffic, disrupting operations and leading to the system crashing. . Depending upon an attack’s intention, procedure, and success, it can last anywhere between 48 hours to 60 days, or even more.

Therefore infotech-driven companies must invest in professional experts who know how to identify a DDoS attack to mitigate the repercussions.

Now that you have a better grasp of DDoS attacks, you may be wondering: What are DDoS attack tools and their categorizations?

A number of DDoS attack tools are available on the black market and otherwise. Some of them are called stressors. They’re genuine tools for security researchers and network engineers to examine and test against organizations’ networks. Although used for vulnerability assessment practices, bad actors utilize them for evil purposes too.

Here are common categories of tools for DDoS attacks:

DDoS attack tools under this category use a low volume of data and run sluggishly as they’re made to send small packets of data across several network connections. This keeps ports on a specific server open for a longer time to consume a server’s resources. The process goes on until the server fails to handle any more requests.

To understand this, you must know what the OSI model is. Open Systems Interconnection or OSI models are the seven layers computer systems use to communicate over a network. All major computer and telecommunication companies accepted and synchronized with the OSI model in the 1980s.

So, as the name says, application layer-7 attack tools target the seventh layer of the OSI model where HTTP requests are generated. Bad actors overwhelm servers with traffic that looks like legitimate requests made by users.

This category of DDoS attack tools uses UDP and heavy-volume traffic to overburden a server and render it dysfunctional. The UDP or User Datagram Protocol is used for time-sensitive transmissions like videos and DNS lookups. Its job is to speed up communications without a formal connection before data transmission.

Below are the nine most famous DDoS attack tools. Their usage depends on what industries the attackers target and their intentions.

LOIC or Low Orbit Ion Cannon is a beginner-friendly, free, and famous DDoS attack tool used for sending UDP, TCP, and HTTPS requests to a targeted server. It uses a significant volume of traffic to its advantage by focusing on a computer’s network connection and sending unnecessary packets to shut down a website.

HULK is short for HTTP Unbearable Load King, a tool designed for research purposes. It’s a choice of many attackers since it overloads the server with legitimate requests that don’t leave a trace or create suspicion.

As the server is driven on HTTP, it bypasses the cache engine and generates obscure traffic.

Tor’s Hammer is categorized under low and slow tools for DDoS attacks and was initially meant for testing purposes only. It can attempt attacks inside the Tor network that operate in the 7th layer of the OSI model. It works by activating dead connections, thus confusing the web to show results.

Tor’s Hammer successfully bypasses firewalls and other security systems for DDoS or DoS attacks. It can generate and spoof IP traffic, sending small and continuous legitimate-looking HTTP packets to the victim server  However, it’s a relatively ineffective tool since the network it uses is slow.

RUDY is short for R U Dead Yet? Instead of using HTTP headers, it works by exploiting long-form field HTTP POST submissions that swamp a network with coordinated streams of denial attacks.

Malicious actors begin by scouting servers with web forms, followed by sending HTTP requests. The aim to outperform competitors is typically what motivates DDoS attacks using the RUDY tool. It’s a popular method as the small HTTP packets look legitimate and go unnoticed until the attack.

DDoSISM is another DDos attack tool used to execute application layer-seven attacks written on Linux and C++. It works by creating multiple non-existent hosts with random IP addresses to simulate a DDos attack against targeted servers.

The strength of the server security framework is analyzed upon the response to this attack. DDoSISM is quite diversified in nature, allowing security experts to try various techniques.

SLOWLORIS is defined as one of the most-used DDoS attack tools. It sends legitimate HTTP requests to overwhelm a server even with little bandwidth. This tool sends HTTP headers in small chunks as slowly as possible, maintaining the connection with a victim’s server for a long time to gain maximum advantage.

This way, the server is tricked into waiting for the HTTP headers to arrive, thereby leaving no space for genuine users. The technique works well because the requests are authentic and not spoofed.

The Golden Eye tool for DDoS attacks was originally created for simulations to put the server in various DoS situations. Experts then examine the security protocols and server response to patch any loopholes.

Although it was initially written for testing purposes, hackers have been using Golden Eye to perform DDoS attacks similar to HTTP flood attacks.

HOIC or High Orbit Ion Cannon is an advanced version of LOIC and is used for high-intensity, bulkier, and more refined attacks. It produces different requests using HTTP POST and HTTP GET packets.

HOIC allows hackers to target up to 256 websites at once and involves a counter to measure the output. Cyber actors can also select the number of threads in an attack. This DDoS attack tool uses add-on booster scripts which are essentially text files containing basic code that allow attackers to specify multiple target URLs.

HOIC attacks are therefore harder to identify and block. The tool is often used by Anonymous to launch DDoS attacks.

PyLoris is a popular tool for DDoS attacks for testing network vulnerabilities. It’s also helpful in handling poor concurrent connections. Its advantages include a user-friendly interface, ability to hit a server using HTTP request headers, and the latest codebase.

PyLoris uses SSL connections and  SOCKS proxies to execute stealthy DDoS attacks directly against the target service. It can utilize a number of protocols, including Telnet, IMAP, SMTP, and HTTP.

Moreover, it supports Linux, Windows, and Mac OS and has restrictions of 50 threads, each with a total of 10 connections.

There are several DDoS attack tools that speed up and automate such cyberattacks. While Tor’s Hammer and DDoSING operate in the seventh layer of the OSI model, SLOWLORIS uses HTTP headers.

On the other hand, HOIC and LOIC use booster codes to scatter the malicious traffic, thus making it difficult to trace an attack. Golden Eye and HULK were initially created for testing purposes, but are used for malicious reasons too.

With so many DDoS attack tools out there, it’s important to conduct regular penetration testing, keep your system’s security updated, and stay aware of the latest cyberthreats.